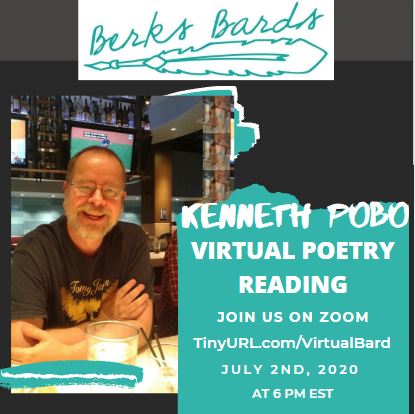 
Below is a sample poem from our featured poet:


When I exhale in my mask

my glasses fog up. Today is humid.

I can barely see where I’m going.

That’s nothing new. My path

is always hazy. I have dahlias to pot up.

They need a head start so we can

enjoy them before fall. It’s not raining

I think of sturdy stalks,

Buds breaking open. Where will we be

in August? I may need the dahlias

of the dead almost visible,

so many names. I put the pot

near the shed, ask them

be vital, bloom your pink heads off.

Bring a cloud down

and ask it to sing on the roof.

Kenneth Pobo was born on August 24, 1954, in Elmhurst, Illinois, but he grew up one town over, in Villa Park. He attended Washington Elementary School, Jackson Jr. High School, and Willowbrook High School. His father Louis was a scientist at Argonne National Laboratory and his mother Myrtle was a homemaker. He has no siblings.For college, he attended Wheaton College in Illinois and for his M.A. and Ph.D. (in English in Creative Writing) he attended the University of Wisconsin, Milwaukee. He received his doctorate in 1983. He began writing poetry on July 4, 1970, song lyrics in the style of “Crystal Blue Persuasion” by his still-favorite band, Tommy James and the Shondells. Writing lyrics became tiring due to the endless choruses and rhymes, and by the end of high school he turned more to free verse. He still enjoys working in more formal verse from time to time, but generally his work is in free verse. His first poem was published in 1974 in a small magazine called Jean’s Journal. He is the author of twenty-one chapbooks and nine full-length collections. Recent books include Bend of Quiet (Blue Light Press), Loplop in a Red City (Circling Rivers), Dindi Expecting Snow (Duck Lake Books), and Wingbuds (cyberwit.net). He has two chapbooks forthcoming, Your Place Or Mine from The Poetry Society of Alabama and Book of Micah from Moonstone Arts. Two full-length books are forthcoming: Uneven Steven from Assure Press and Opening from Rectos Y Versos Editions. His interests in gardening and music have been central to his writing. Songs, usually from the sixties and often relatively obscure, float in and out of his lines. The garden is a central metaphor, a place of joy and meditation—but also of disease and death. Human rights issues, especially as they relate to the LGBTQIA+ community, are also a constant presence in his work. In addition to poetry, he also writes fiction and essays. He currently has an interest in blending forms more, exploring the shifting boundaries between poetry and fiction. He has taught at the University of Wisconsin, Milwaukee, from 1977-1983 (teaching assistant); the University of Tennessee, Knoxville, from 1983-1987 (Instructor), and for the past thirty-plus years at Widener University in Chester, Pennsylvania (Associate Professor in Creative Writing and English). In 2007, he won the Lindback Award for excellence in teaching. He retired in May 2020.Catch his radio show, “Obscure Oldies,” on Saturdays from 6-8pm EST at www.widecastradio.com