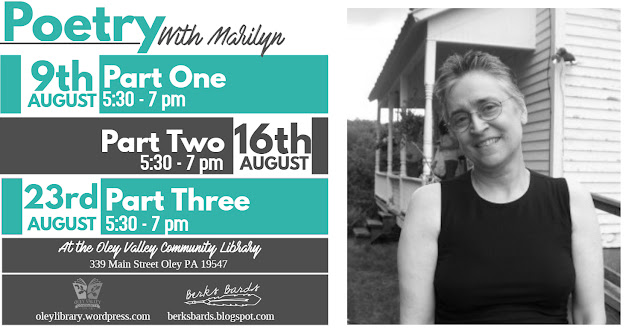 Join Marilyn Klimcho at the Oley Valley Community Library for a Three Part Poetry Workshop Series!
Learn more about Marilyn before the events by reading more below:
Marilyn LT Klimcho is the author of Steeped in the Ceremony of Great Age, a book of poetry. She is also the author of a short story, Lost Gems, which was nominated for a Pushcart Prize. Her work has been published in the Schuylkill Valley Journal and by Studio B in Boyertown as well as in the anthologies: Bird Song and US20, produced by Foothills Publishing. 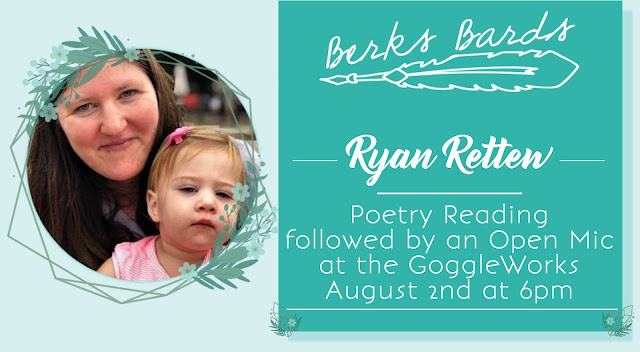 Berks Bards is excited to welcome Ryan Rettew! Join us at the GoggleWorks to hear her music and poetry. Following the performance, we'll allow ANYONE to step up to the mic and read anything that moves them. Learn more about Ryan before our event by reading more below:

Ryan Rettew grew up in and is a 2004 graduate of . After high school, Ryan followed her love of reading and writing to study English at where she graduated with a bachelor's degree in 2008.

While studying at , Ryan received recognition for her poetry. Her work was published in the school's literary magazine, Tobeco. She also earned a scholarship to attend the Chautauqua Writer's Festival. Ryan discovered her unique poetic style when she began putting her words to music. Songwriting has become Ryan's primary means of poetic expression. She has given performances at several locations in and around Berks County, including Boyertown's Turning Leaf Festival, The Other Farm Brewing Company (now known as The Other Farm & Forge), and Chaplin's Music Cafe.

In her early twenties, Ryan came up against drug addiction and depression. She has continued to write throughout her journey in recovery from these challenges. She began a career in teaching in 2012. She now lives in with her husband, Jim and many pets. She is a stay-at-home mom to their daughter, Robin, and has plans to return to teaching soon.

Below is a sample of Ryan Rettew's work:

Lyrics to “Map of Faces”

There's a lake where I forget.
You can come forget there, too.
The map I drew
looks like faces of the people that you knew.
It's the only way
to reach that lake.

Loneliness is a killer.
Ears and eyes are traitors to the soul.
Forgetfulness is better.
It's just a natural part of getting old.

O prophets spoke
of you.
I swear
I knew you once.
Your name
escapes me now but since
we're here
let's go somewhere.

There's a lake where I forget.
You can come forget there, too.
The face I drew
looks like maps of all the places that you knew.
It's the only way
to reach that lake.

Loneliness is a killer.
Ears and eyes are traitors from the start.
Forgetfulness is better.
It's just a certain stillness of the heart.

O prophets spoke
of you.
I swear


I knew you once.

Posted by Berks Bards at 1:11 PM No comments: