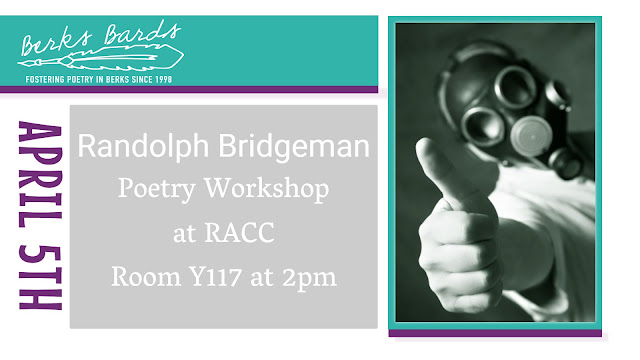 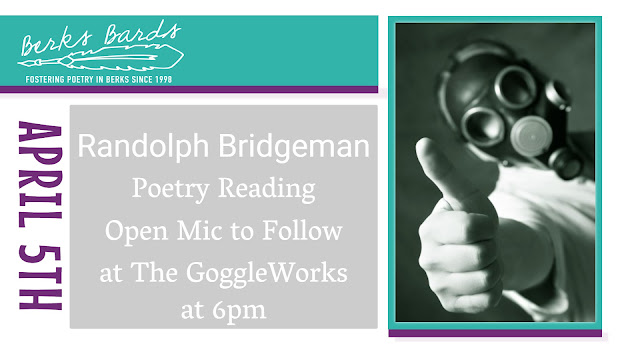 
Randolph Bridgeman graduated from St. Mary's College of Maryland. He is the recipient of the prestigious Edward T. Lewis Poetry Prize. He was a Lannan Fellow for the Folgers Shakespearian Theater 04-05 poetry reading series. He teaches poetry in the Great Mills High School, 21st Century Program. His poems have been published in numerous poetry reviews and anthologies. His poem Crazy Bob’s Used Car Radio Tips, was nominated for a 2018 Pushcart Prize. He has four books of poems, South of Everywhere 2005, Mechanic on Duty 2008, The Odd Testament 2013, and The Poet Laureate of Cracker Town 2015. His new book, The Trailer Park Chronicles, is forthcoming in 2018.The dedication of The Trailer Park Chronicles reads: For Mrs. Fitzpatrick, my 12th grade English Teacher, who had the personality of Kansas Zip Code, FUCK YOU! Look who’s written a book. 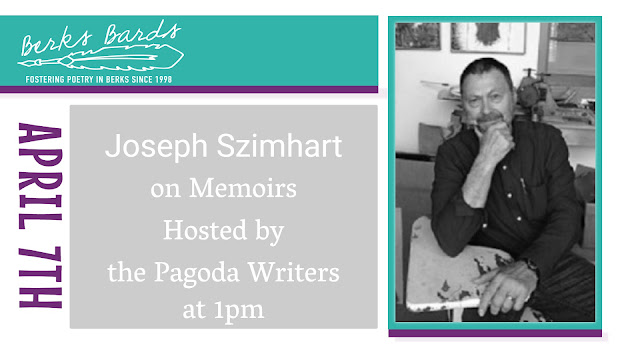 
"I am in midst of rewriting a memoir of my career as a cult interventionist and how I got into that strange line of work. I finished a 400-page manuscript ten years ago, but no publisher would accept it. We will go over goals and what I think we should avoid when writing a memoir."Joseph Szimhart (www.jszimhart.com/about_me) is an Artist, published author, mental health worker, and cult information consultant. He has had an art studio at Goggleworks in Reading since 2011 and studied at the Pennsylvania Academy of Fine Arts.Joseph has also worked as a Crisis Intake Caseworker at Montgomery County Emergency Services since 2000. He also worked as a cult interventionist, consultant, and lecturer since 1980. Joseph has had many media appearances, research and opinion articles and book reviews published in professional journals and books on cults.Joseph has written a novel: Mushroom Satori: The Cult Diary published in 2013 by Aperture Press in Reading, PA and has an undergraduate degree in Arts and Sciences from the University of Dayton. His writing and art has been featured in the cover story in ICSA Today magazine, 2017: “Retribing the Planet: Shamanism Repurposed for Modern Times” (International Cultic Studies Magazine, Vol. 8: No. 2). 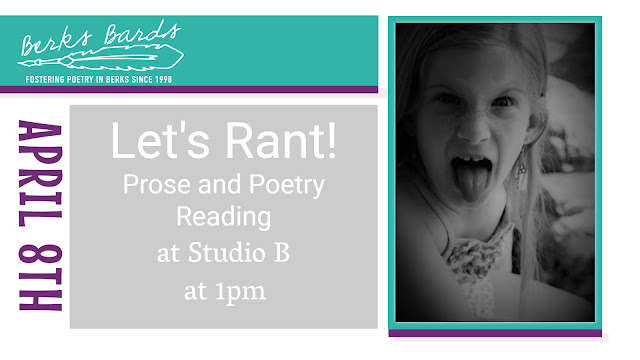 
Studio B will be holding a poetry/prose reading for those who submitted pieces of writing for “Let’s Rant." The exhibit for ''Let's Rant'' is debuting with an opening Friday, March 16 from 5 p.m. to 8 p.m. The exhibit will run until April 15, 2018. 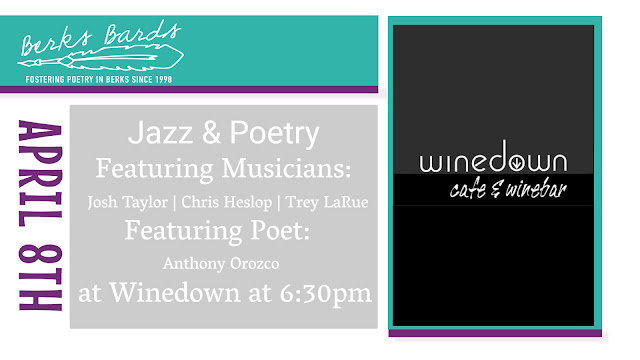 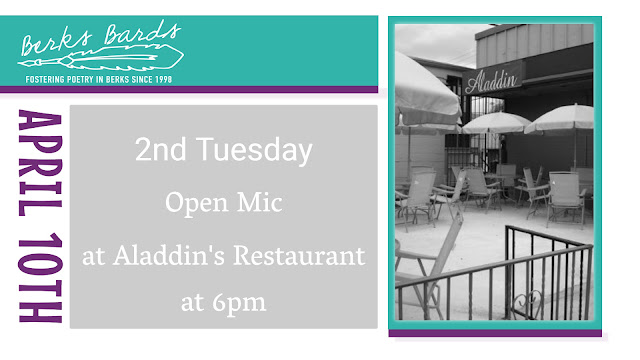 
Our regularly occurring 2nd Tuesday Poetry Reading & Open Mic meets at Aladdin's Restaurant at 6pm every second Tuesday of the month. Join us downstairs for food, drinks, conversation, community, and of course...poetry! 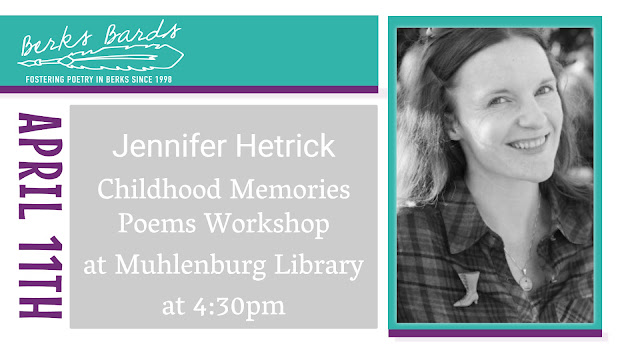 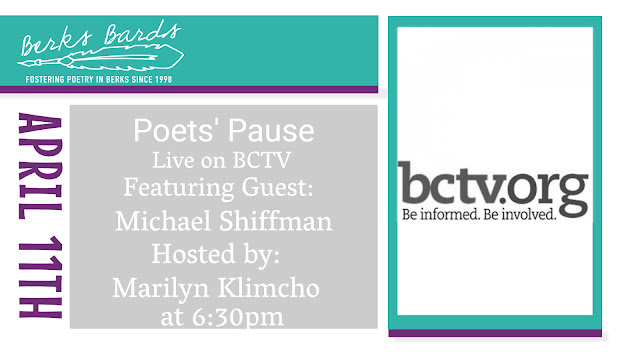 Where: Live on BCTV or later archived at BCTV.org


Join us LIVE on BCTV to watch Poets' Pause featuring special guest: Michael Shiffman. Hosted by Marilyn Klimcho, this show will discuss the works of Shiffman, what brings inspiration, beloved poets, and more! 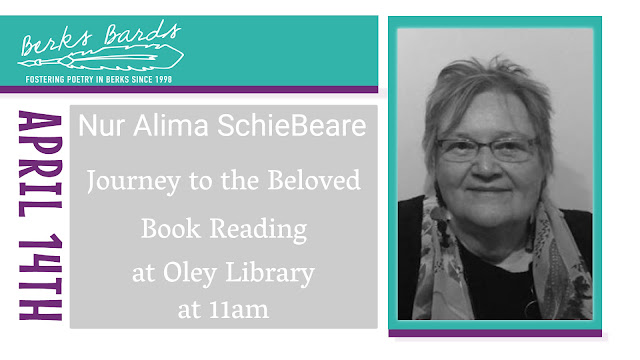 
nur alima schieBeare attended the University of Pa and Antioch University where she studied psychology, counseling, holistic health and comparative religions She received her master’s from Bryn Mawr college where she studied policy and clinical social work. She has worked in both adult and juvenile prisons, private high schools and in family service agencies using classical and holistic treatment modalities. She has studied meditation and religions most of her life and is a devotee of both Jalaludin Rumi and Hafiz. She is a student in the Sufi Order of the West, founded by Hazrat Inayat Khan.During this event, she will read selected poems from her recently released book: Journey to the Beloved. Learn more about Nur Alima here: http://foothillspublishing.com/2018/nuralima.html. 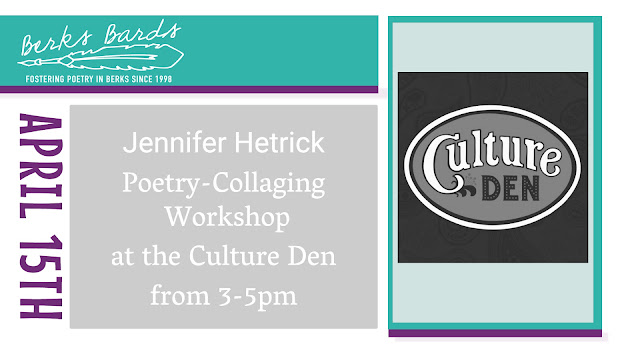 
Bring together poetry on the page with scissors and eye-savvy visuals; use the ones supplied, and bring your own, too.


Join Jennifer Hetrick for a collaging with poetry workshop! Feel free to bring magazines and other printed visuals which might be useful to cut up as well as scissors and tape or glue. Supplies will be included, but the more, the merrier. Beatniks & Bongos: where verse meets vibe...Open mic for poets with live musical interludes. Bring your favorite poems and percussion, and relive the rebellious beat generation here at the den! Poets have the option to be recorded and contribute to our ever-growing archive of performances. Bohemians welcome! 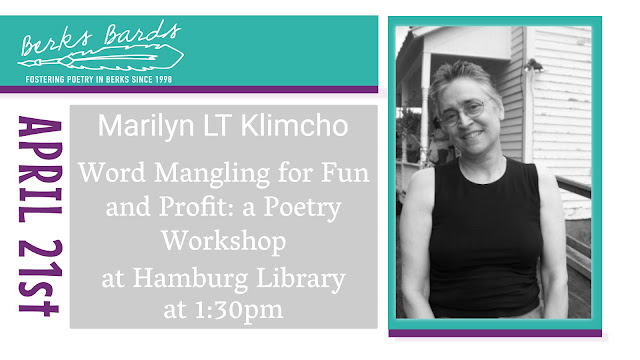 
Word Mangling for Fun and Profit: a poetry workshop with Marilyn LT KlimchoMarilyn LT Klimcho is the author of Steeped in the Ceremony of Great Age, a book of poetry. She is also the author of a short story, Lost Gems, which was nominated for a Pushcart Prize. Her work has been published in the Schuylkill Valley Journal and by Studio B in Boyertown as well as in the anthologies: Bird Song and US20, published by FootHills Publishing. 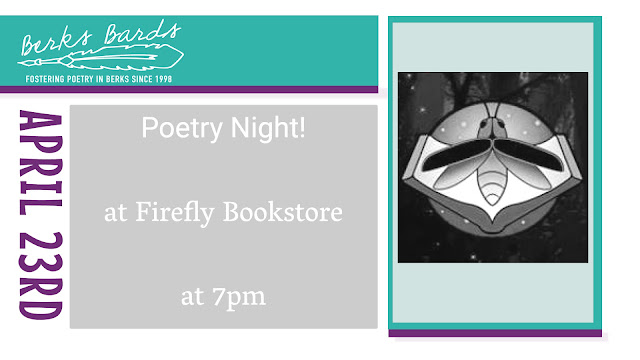 
April is National Poetry Month, and we will be celebrating with readings from local poets and open mic time for you to share your favorite poems or your own creations! 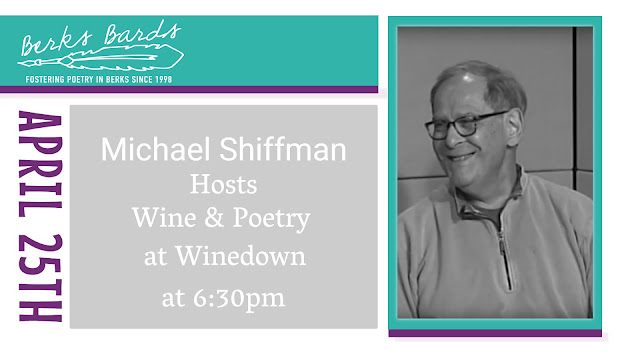 
Michael Shiffman attended Dartmouth for his BA and Columbia for his MA. He is a Reading/Mount Penn native and has held many professions including Tailoring, and Wine Salesman 18 yrs.During this event he will pair wine and poetry and later open the floor to anyone interested in sharing their wine-inspired poetry.

About this event, Michael Shiffman shared these thoughts:
It is difficult to convey much about the world of wine in a few hours. It is too complex, too full of geography and history and an infinity of tastes. But one thing can be accomplished, and that is to dispel the impression that one must "know" about wine in order to enjoy and appreciate it.

Wine at the outset is an experience and remains exactly that for as long as you are interested in it. Think of wine as having two parts. There is wine information or everything people think of as "knowledge." And then there is tasting experience without which there can be no knowledge.

Drink as widely as you can. Don't be concerned if you are unfamiliar with what's in your glass. Taste with curiosity and attention. Listen to the wine and try not to prejudge it. The world of wine holds more tastes and flavors than anyone can imagine. And always remember: "the palate is smarter than the brain." 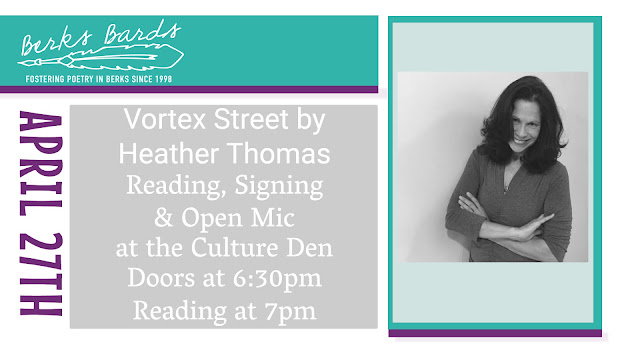 
Heather H. Thomas will read from her new book Vortex Street, praised as a “coiled spring ready to explode through its own serene surface” of poems arising from her local and global experience and mediations. Thomas, a creative writing professor at Cedar Crest College and a Berks Poet Laureate, will be followed by an open mic for poetry. 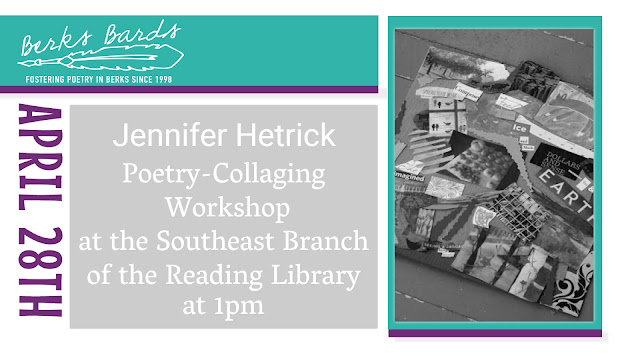 
Bring together poetry on the page with scissors and eye-savvy visuals; use the ones supplied, and bring your own, too.Join Jennifer Hetrick for a collaging with poetry workshop! Feel free to bring magazines and other printed visuals which might be useful to cut up as well as scissors and tape or glue. Supplies will be included, but the more, the merrier. 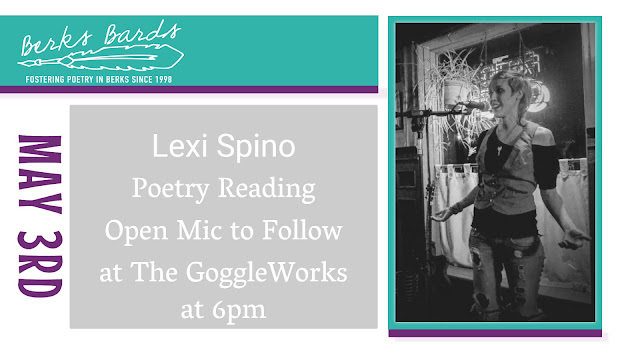 
Lexi Spino is a young poet from York, PA. She first joined Berks Bards early last year, and since then, we've been dying to have her back! She's got a chapbook titled "I'm A Wanderer, Not A Runaway", a spoken word EP called "Suicidal Since Birth", and a poetry book "This is Not For You" available. Her work can also be heard on Spotify! She is very heavy into the art scene around York and when she isn't writing or being an active member of the art society she is running around like a five-year-old with her daughter. 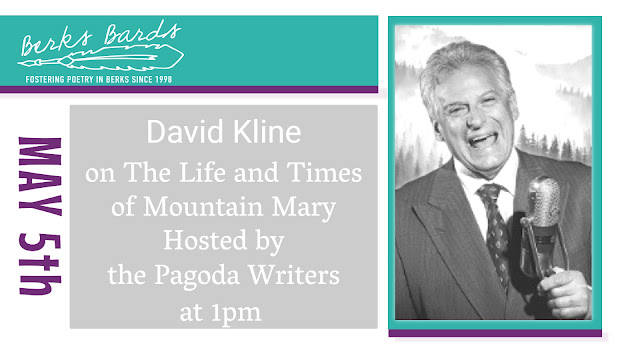 
Dave Kline on The Life and Times of Mountain MaryAn interactive exploration of Dave’s work to explore and portray the live and times of a woman who was way ahead of her time here in Berks County.Dave Kline is a business person, musician, composer, entertainer, writer, photographer, traveler and bard who has traveled the world bringing back folkloric tales of traditions, customs and culture. Dave writes, produces and hosts the award-winning, weekly Mountain Folk radio and web show that is herd on terrestrial radio stations in the USA, as well as internationally via satellite and Inet networks, including Apple iTunes and PlanetBluegrass Network. Dave writes the weekly Mountain Folklore column for Berks County Magazine in the Reading Eagle newspaper, has written and taken photographs for other publications such as Pennsylvania magazine and is an experienced mountain guide with more than 50 trips to the alps and beyond to his credit. 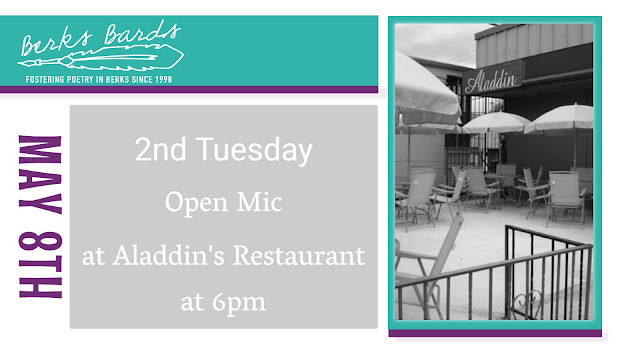 
Our regularly occurring 2nd Tuesday Poetry Reading & Open Mic meets at Aladdin's Restaurant at 6pm every second Tuesday of the month. Join us downstairs for food, drinks, conversation, community, and of course...poetry!

We are Berks Bards, a grassroots poetry group and nonprofit meeting on First Thursdays of each month at 6 pm at GoggleWorks Center for the Arts at 201 Washington Street, Reading, PA 19601. These monthly poetry readings include a featured poet and a community open mic.
We also host a Second Tuesdays open mic at 6 pm at Aladdin Restaurant at 401 Penn Avenue, West Reading, PA 19611.
In April, we celebrate National Poetry Month through what we call Bard Fest, poetry workshops, readings, musical collaboration performances, and other types of events around Berks County.
To join our email list, email berksbards at gmail dot com.