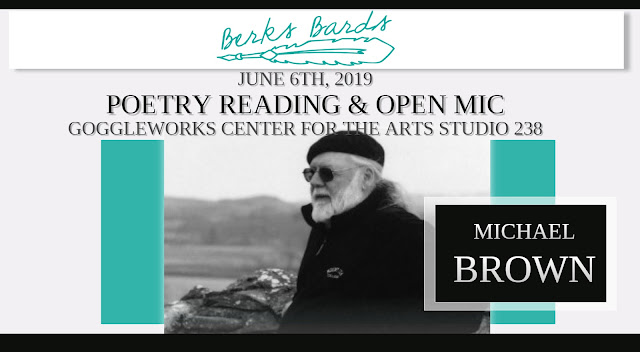 Michael R. Brown was born in Philadelphia, raised in Lancaster County, and went to college at the University of Scranton. He started teaching in inner-city Philly, then Bucks County, and left for the University of Michigan where he majored at the Ph.D. level in English and Education. His dissertation was a literary history of the poetry of the Harlem Renaissance directed by Robert Hayden. By then he had his own poetry published and had become expert in the teaching of writing. He left Ann Arbor to teach in East Texas, Central (Ohio) State, Western Michigan, and the University of Illinois. He taught in Chicago storefronts and community centers, then settled into Chicago State University as Director of Composition, with a two-year sojourn at Suwon University in South Korea. On his return to Chicago he became engaged in the Poetry Slam, and he and his wife Patricia Smith moved to Boston and established a slam that continues till this day. In 1992 he organized the third US National Poetry Slam, and in 1993 he led the US National Slam championship team in San Francisco. He also published travel articles, political columns, and short stories. While resident in Boston, Brown taught at the University of Rhode Island, Suffolk University, Clark University, and Mount Ida College where he became head of the Communications Program. Meanwhile, he had five books of poetry published: Falling Wallendas (Tia Chucha, 1994), The Man Who Makes Amusement Rides (Hanover Press, 2003), Susquehanna (Princeton, Ragged Sky, 2003), The Confidence Man (Princeton, Ragged Sky, 2007), and The Martin Bormann Dog Care Book (Robbinston, Maine: Resolute Bear Press, 2017). The last book is a collection of his political poems written over the past 50 years. Since 2007, he and his wife, the poet and editor Valerie Lawson, have lived in rural Down East Maine, where the edited the poetry quarterly, Off the Coast, from 2008 to 2017. They now own Resolute Bear Press, where she published the 3 Nations Anthology which won the 2017 Maine Publishers and Writers Award for the best anthology. They are currently work on bi-lingual books of Passamaquoddy tales and poetry.

Don't forget to join Michael at the Pagoda Writer's Circle the Saturday following this reading for a Ekphrastik Writing Workshop!

Learn more about this workshop by visiting: https://pagodawriters.com

Below is a sample poem from our featured poet:
City of Night

In a strange land,
there are no cool nights in hot cities.
Light is always dusty gray, air gritty,
sounds loud and muffled,
people warm and wary.
Love takes place among the ruins,
like trysts at the Coliseum,
sports cars left in the street,
girls in tank tops backed against stone blocks,
guys’ jeans hooked behind their knees,
cats watching from damp niches in the walls.

The most important things are said in other languages,
kisses laid on foreign tongues.
The antidote is a walk along a river to catch
a homeless artist pretending to work late
against the stone embankment by the Seine,
listen to young ghosts murmur behind Westminster,
watch the kids on holiday just off the big piazza
imitating colossal statues with dwarfed good humor.

In the morning I climb several flights of wooden steps,
sit in a straight chair under a low ceiling
at a cluttered table in a rented space,
blocking out the sound of someone else’s TV
and traffic that blows in airless rooms
filled with other people’s belongings.
I clear a notebook-sized space,
look out a window facing windows,
and write as though I’m in prison,

even though it’s just another cage with an open door.

Berks Bards
We are the Berks Bards, a grassroots poetry group that meets the first Thursday of each month at the first floor Cafe in the GoggleWorks, Second & Washington St, Reading, PA. Monthly poetry readings feature an invited poet and an open mic. Special poetry events are planned for the Literary Festival in October and BardFest in April.